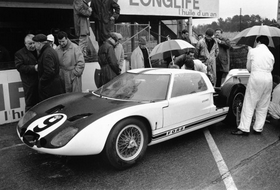 The Ford GT40s were designed for speed, unlike any other to have ever graced the race track at Le Mans. The goal was to have them loop through the Mulsanne Straight at 200 mph. Two months before Le Mans proper, public roads were treated to a slice of the June showdown. It was April 18, 1964. Granted access to the pits, journalists and spectators gathered around the widely anticipated Ford GTs. That weekend, however, there was a competition in England – the Aintree 200, and Ford had entered with its top drivers including McLaren and Hill. Both were expected to be back in time before the test weekend was over. In their absence, Wyer had asked two other drivers to test the Ford GTs. They were Roy Salvadori and Jo Schlesser, the former was Le Mans champion in 1959, and Schlesser, a Frenchman with more crashes than successes under his belt, was brought in to spice up French presence in the Ford team.

Salavodori was first to try out the Ford GT, firing the engine, putting the car in gear and getting the clutch to action on a slippery wet pavement. Off he went and the Dunlop tires gripped the 8.36 miles long track in style. It was an edgy moment for Wyer and Lunn. Any serious issues could put their Le Mans hopes in jeopardy. Flying past the Dunlop Bridge and down through the Essess and 3.5 mile Mulsanne Straight, Salvadori was back into the pit in minutes and his look spelled something was wrong.

“I can’t believe this, John, but I think we’re getting rear wheel spin at 170 mph,” Salvadori informed Wyer. That was enough speed to lift the rear off the ground, not the safest ride for any Le Mans driver. Was there some fault in the suspension system, or aerodynamics? Lunn and Wyer deliberated. The former was identified as the culprit. Mechanics got to work, but Salvadori wasn’t going to risk a second drive, he already had his fill and test day was over for him.

Taking his place was Schlesser, who Wyer instructed “Do not take chances. Bring the car back in one piece.” At the wheel, the Frenchman was off quickly, moving under the bridge in no time. A minute passed, and another, Schesser wasn’t seen turning the corner. He never did. A phone call came in informing there was an accident. Schlesser survived, thankfully. At 160 mph, Schlesser had lost control as the car fishtailed down the straight. Now the test day was over for both Lunn and Wyer. The only other GT40 crashed the following day with Salvadori at the wheel. Salvadori wasn’t hurt, but the car was totaled. The Ford Team had to regroup, headed back to England after test weekend.

News of the Ford failure spread quickly. The title credentials of Ford were put to the test, and things looked more bleak than promising. The New York Times reported on Monday morning: “In trials that ended yesterday, a Ferrari car driven by John Surtees was clocked at 194 miles per hour down the three-mile Mulsanne Straight. Nothing has ever traveled here that fast before. And two Ford prototypes crashed. These Fords were new, unbelievably sleek and expensive … People who know money think Ford can build a winner. People who know car racing are not so sure.”

Comments from Paul… wheel spin at 170mph!!! Looking forward to that!