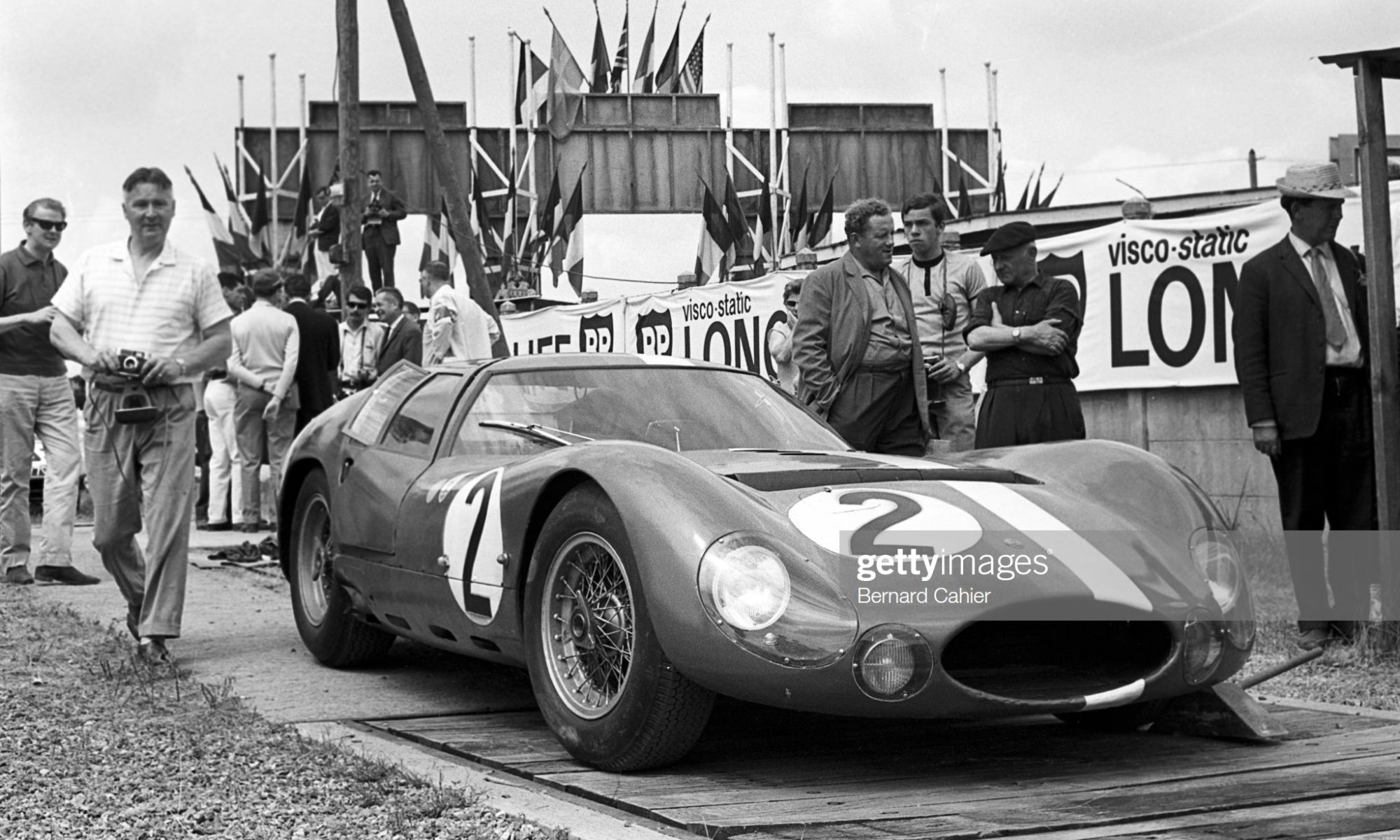 As the starter dropped the French flag at exactly 4:00pm, the drivers sprinted across the road and into their cars, cranking their engine, hitting the ignition and firing their cars forward in the fiercest fight for speed racing could serve. Phil Hill had problems, though. His engine stalled, when he needed it the most! Cars flew past him into the opening straight and Hill couldn’t believe his eyes. Mechanics and Ford executives looked on, distraught.

Hill would eventually get the car moving, but he was well behind the pack, in last, by then. Surtees was enjoying a blistering start, flying down the straight, up the slight right-hand incline, and under the Dunlop Bridge. But before he could catch a breath, two other Ferraris stole speed and darted in front, leaving him in third. The race just started, and there were many hours ahead. Still, getting off to a flying start was important. Surtees wasn’t deterred, pouring every bit of focus and speed he could muster.

At the end of the first lap, Ferraris were stealing the spoils, the red machines occupying first to third. Wriggling his way past the tricky esses on lap two, Surtees saw from his rearview mirror a Ford GT40 was pacing neck to neck. Surtees downshifted into second gear, veered into the right-hand Tertre Rouge corner and onto the Mulsanne Straight. Then he unleashed speed. Third gear, fourth and fifth, Surtees was almost clocking 190pmh, but the Ford behind wasn’t moving any slower. At the wheel was Richie Ginther, who suddenly shifted to the left, finding enough power to muscle past Surtees at such speed never seen on the straight.

It was a moment of bliss for Americans. Jim McKay was in the press box for ABC, screaming  “Word from the course is that Richie Ginther, who had moved up from eighth to fourth place, has passed some more cars. As a matter of fact, the word is that Richie Ginther has taken the lead in the second lap in the white Ford with blue stripes. The American racing colors are in the lead at Le Mans! There he is on the right of your screen. Get a look at that low-slung Ford! I’ve never seen a car as low as that!”

Meanwhile, Phil Hill was out of the action, mechanics digging into the engine to fix his car. He would lose over 20 minutes before motoring back to the track. Now in forty-fourth, Hill knew he stood little to no chance catching up with the Ferraris. He had won here before and knew well how tough the circuit was. Balancing speed and safety was his forte. If there was any time he needed those, it was now. Turning in a series of perfect laps, Hill put his rev and mph counter to maximum use, summoning 185 mph, then 200 mph in his bid to make up for lost ground.

Leading the pack in first, Richie Ginther entered into the pit at 5:30pm. Spectators were thrilled by his performance. Mechanics got to work, checking the tires and filling tank.“Well, for God’s sake,” Ginther shouted, “isn’t anyone going to ask me how the car went?.” He’d go on to tell how he flew past the Ferraris on the Mulsanne Straight, reaching 7,200 rpm and 210 mph in the process – another record-breaker. It was only two months back during test weekend that Surtees set a 194mph on the Straight. It took two minutes seven seconds to haul the #11 Ford back on track. Enough time to allow Surtees in front. Ginther’s teammate Masten Gregory took his turn at the wheel.