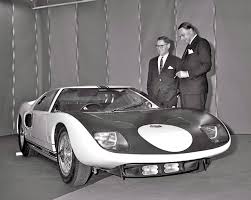 With parts from across continents, Ford had to ensure its car components passed necessary checks. Major components could not be replaced once the race began, and failure of one part would mean a “Did Not Finish” result at Le Mans, surely not what Dearborn was gunning for. Testing was next, and the task of getting a test driver fell on John Wyer’s shoulders. His pick would go on to become in household name in car racing – Bruce McLaren.  New Zealand born McLaren began racing in his childhood and had grown to become one of the finest engineers and drivers in the world.

Working on Lunn’s specification, a three-eighths-scale clay model of the car’s body was completed in Dearborn, nothing like the automobile had ever been conceived in an American design studio. At 156 inches long and just above 40 inches in height, the car’s official name was Ford GT, even though it was a prototype and not built to race in Le Mans GT category. It would eventually be called GT40. The engine was the modified 256-cubic inch Fairlane V8, delivering 350 horsepower. Engineers in Dearborn also made sure the suspension system was built to withstand the barrage of attacks on Europe’s racetracks.  For this purpose, they came up with – the computer, an unprecedented tool in car design. The GT40 also had a maximum fuel capacity of forty-two gallons, in compliance with Le Mans rules.

In December, the team had everything in place and got started building the first car. But they were running out of time, a worry Lunn reported to Dearborn, noting that race preparation and build time will now have to run concurrently. All hands on deck, the team managed to roll out the first GT40 on April 1. Painted navy blue and white, with a long, sloped nose, rear stance and a raised, clipped tail, every move in Ford’s latest build reflected hours of thought and attention down to the minutest of details. Still, the design team wasn’t done. They had to build two more cars in time for Le Mans, and practice days were also near – only three weeks away before the GT40 would take its turn on the track at full speed.

The GT40 was unveiled before a packed audience at the New York Auto Show, perfectly timed to bring Ford’s racing machine to the view of the entire world. Taking to the podium, lacocca delivered a short speech, raving about 350 horsepower and 200 miles an hour. Before them was a racing machine featuring an engine built in the United States, a transmission from Italy and brakes from England. It was more than just an American racing car, this was The World Car.

The duel was well underway on both sides of the Atlantic. With Le Mans practice days inching even closer and The World Car yet to welcome its first test-run, Lunn and Wyer turned their attention to Goodwood, where they’d see McLaren put their machine to the test on the race track. They dreaded the worst. If anything was off, they may well have lost the race before it started. Standing right next to Wyer, dressed in a leather jacket and leaning against the pit wall, was Phil Hill. Hill spent the 1963 season with Italian racing outfit ATS, but things didn’t pan out with the firm, as did Hill’s racing season. He was trying to get back up having endured scathing criticisms that left the American champion questioning his ability. Le Mans was only days away and Hill had no team. Wyer snapped him up for Ford. Hill was up against his former boss Enzo Ferrari, and the build up to the showdown at the 1964 Le Mans couldn’t be more intriguing.