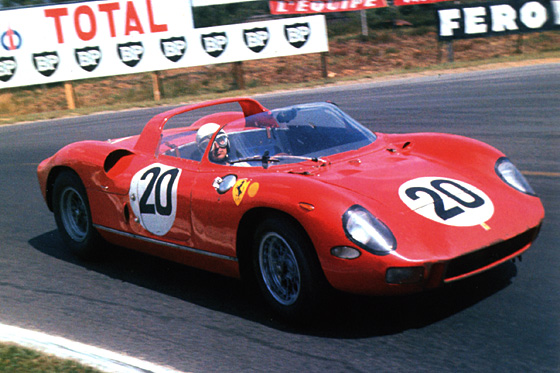 On the eve of the race, Surtees was interviewed by Stirling Moss, the latter now covering ABC’s Wide World of Sports having enjoyed tremendous successes on the track. In some quarters, Moss was considered the greatest driver to ever grace the race track, but his career was truncated in an accident three years back. And here he was, his hands holding a microphone rather than a steering wheel. Like everyone else, the challenge of Ford in the 24hr race was something Moss looked forward to. Asking Surtees of Ferrari’s concern about the American threat: “To a firm like Ferrari which produces a specialized product and sells most of its cars in America, it’s very important.” Surtees replied.

Moss continued: “Ferrari has won this race four times in a row, and if he wins this race it’ll be five times, which has never been done. You’re entering four cars?”

“How many men did you bring?”

“Our team is comprised of about twelve or thirteen mechanics, one engineer, and one team manager.”

Moss looked around the garage. There were seven cars. “What are the extra cars for?”

“In case anything unusual happens,” Surtees said. “For instance, the other night we were out and we hit a fox in the middle of the road at about 140 mph. It could have damaged the car rather badly.”

“Well I imagine it damaged the fox rather badly,” Moss laughed.

The interview was over, and sleep was next on Surtees’ checklist. He’d been tired all along. Thankfully, meetings were not part of Ferrari’s strategy. Everyone was left to himself on the track. Surtees was paired with another driving maestro Lorenzo Bandini. Both were clear favourites heading into the race.

Things were different at the Ford camp, though. Wyer summoned all racers to a meeting, dishing out instructions to his team. He wanted execution to be laser perfect, according to his orders.

“We want to finish the race. We aim to keep our cars running. We all must remember, this is an endurance race, not a sprint race.” Wyer said. Leading the Ford team were Phil Hill and Bruce McLaren. The goal was to “Stay close at court,” Wyer instructed. “Speed must be as high as possible while conserving brakes and gearbox. You must stay in a position to strike if attrition takes its toll on the leaders, which it always does.” As for junior drivers Briton Richard Attwood and Frenchman Jo Schlesser, finishing the race successfully was all that was expected. The other two drivers were Richie Ginther, who was fastest in the qualifiers for the Ford team, and Masten Gregory -“The Kansas City Flash.” Ginther was ordered to make the start difficult for the Ferrari drivers. Ford needed to show the world it was capable of upsetting the best, a point clear to all drivers in the Ford team.

With race time inching closer, the city was overwhelmed from all directions. There were private planes and helicopters in the airfield, cars moving bumper to bumper past the train station, the stage was set for one of the most anticipated days in Le Mans history.

The grandstands welcomed well over 300,000 spectators, an unprecedented number in the history of the 24hr race. Flowers were piled up around the spot where Pierre Levegh crashed nine years earlier.  Hour after hour, the clocked ticked closer to start time. Shortly before 4:00 P.M., all drivers were seen geared up, donning their fireproof coveralls, racing shoes, leather gloves, and goggles. Enzo Ferrari was watching from Italy. Shelby was in the cockpit, gripped by the thought of his company’s reputation on the line. Other Ford executives were present. National anthems were soon played, silence followed, and as the final moments kicked in. A voice over the loudspeakers counted in French: