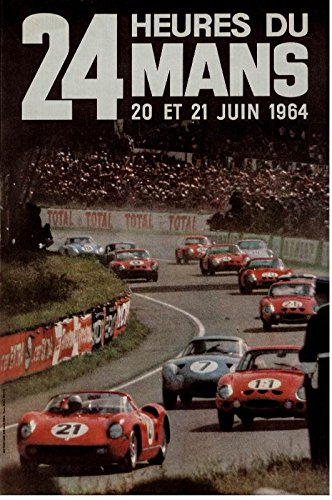 Beating Ferrari on his home turf – Le Mans – was something nobody had managed to do from 1960 – 1963. That an American car could rewrite the history was not even conceived, a challenge Ford was ready to take on. Finishing the race alone was considered success, much less winning it. But surprises were becoming a staple in 1964. U.S. President John F. Kennedy had been assassinated less than a year before, and Martin Luther King Jr. delivered his famous “I have a dream” speech in Washington.

The Dearborn team was an Army of specialists, tire and engine men. Every one needed for Ford’s Le Mans quest caught the flight to France. Race week was always a hive of activity, and the build-up to the 1964 Le Mans was no exception. Three Ford prototypes were moved to a paddock beside the hotel. Mechanics were on hand all night taking apart every piece, and rebuilding them. The rear end was particularly a focal point. Wyer and his team had poured significant hours modifying the cars in time for Le Mans following the unsuccessful test weekend two months prior.

Practice and qualifying days were scheduled Wednesday through Friday, with Le Mans proper starting 4:00 P.M. on Saturday. Wyer took control of things, setting a rigid schedule that left nothing to chance. While preparations were in full swing ahead of race day, there was problem back home. The deaths of Eddie Sachs and Dave MacDonald had sent many suits to Dearborn. Investigations were underway. But Ford couldn’t afford to halt proceedings away from home, the firm’s PR chief stating “We are all shocked and saddened by this tragedy. But I don’t think it should be a factor in making us pull out of racing. It’s dreadful that it happened. But this is built into racing.”

Practice sessions soon took center stage at Le Mans. From silver Porsche 904s to Jaguar E-Types, red Alfa Romeo Giulia TZs and green Triumph Spitfires, the pit lane was lined with top-of-the-line racing cars from across Europe and beyond. Champions John Surtees and Phil Hill were spotted, as was Carroll Shelby who, unlike the former pair, had retired from driving and was now a constructor. Shelby was bidding for glory in the GT class – a feat yet to be achieved by an American car. He was lined with Ford money, and his Le Mans weapons were his Cobras. A win would shine the light on his little automobile company, but he had to wait till race day to find out.

Speaking to a Sports Illustrated reporter, Shelby admitted “Outside of the United States, the Le Mans race has more prestige than all the other races put together. Le Mans receives throughout the world probably five times as much publicity as Indianapolis. Any automobile manufacturer who wants to make a name for himself in racing has to do well at Le Mans.” Ferrari had entered four cars, up against three Fords and two Cobras. The engines took their turns cranking revs from all directions as qualifying races began. It soon became obvious that the 1964 Le Mans was going to be about records. And Ferraris were the cars to beat. From 3:47.2 to 3.47 and then Surtees’ 3.42, Le Mans lap record was consistently broken. Surtees shattered his own lap record ten seconds faster. Simply dumbfounding! Following Surtees was a Ford driver named Richie Ginther, with Mexican Pedro Rodrigues in third and Phil Hill finishing fourth. The qualifiers held over an 8.36-mile course, but less than four seconds separated the top four. It was game on!