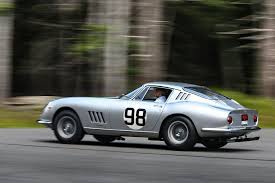 Setting out of his Modena home on a winter morning in 1964, Enzo Ferrari has his loyal chauffeur Pepino waiting at the wheel of a purring Fiat 1100. Now sixty-six, Ferrari was fast approaching his twilight years. The automobile genius having seen out many successes and challenges for years on end was finally finding some comfort. His new home was both comfy and spacious enough for his wife, and his mother Mama Adalgasia. He’d rather be driven at this age, but his undying love for Fiats remained. Pepino’s morning commute eventually lands them at the factory.

Ferrari had enjoyed virtually all successes race cars could win.  But by 1964, the quest for speed and design of sports cars had become global and competition for customers was increasingly fierce. From Porsche 911 to Jaguar’s E-type and Lamborghini 350 GT, there were more than a handful of competitors vying for global dominance.

Still, Ferrari’s two new 1964 models were truly amazing. Dubbed “the Sophia Loren of supercars,” the 275 GTB was blindingly elegant, yet fully designed for speed. And the new customer car – high-end 500 Superfast – had enough steam to hit 170mph. There was limited supply of Ferrari’s Superfasts – only thirty-six made, but purchases came pouring in, with the Shah of Iran cashing in on two, and Peter Sellers buying one. If anyone was more popular than Ferrari in Italy, it had to be the Pope. His popularity swayed 40% of his sales to America. Clients included New York’s governor Nelson Rockefeller, William Holden and the Dupont and Dulles families.

Following the death of Von Trips, race champion Phil Hill eventually took the exit route from Ferrari’s team. He didn’t click with new manager Eugenio Dragoni.  Hill didn’t regret his departure, though, stating that Ferrari never really gave him his full support. “I wasn’t sorry to leave. Enzo Ferrari never understood me … He always favored the man who would take that extra risk in a live-or die situation. I wasn’t willing to die for Enzo Ferrari. I wasn’t willing to become one of his sacrifices.” Hill said in an interview.

Following Hill’s exit, Englishman John Surtees soon became the leading figure in Italian racing. A contract driver with Ferrari, Surtees got off to a sensational start and was endeared Il Grande John by fans. His first meeting with the boss was a remarkable one. “It was a curious feeling as I walked through the door of Ferrari’s office that morning, as if I was stepping into another world,” Surtees noted. “It seemed as though everybody was going about their jobs with a reverential earnestness which was almost unnatural. I was experiencing for the first time the unique magnetism of Ferrari.”

Comments from Paul… John Surtees, the only man to win world titles both on motorbikes and cars! Don’t think that will happen again in a hurry….