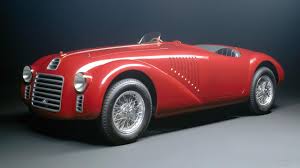 Ferrari opened his machine factory in Maranello during World War II. But proceedings took a dip months later when American bombers brought the factory to ruins in November 1944. That winter, Luigi Chinetti, a two-time Le Mans champion, linked up with Ferrari. The former, a strong antifascist, had moved to the U.S. on the eve of the war. Seeing his new world lacked the sports cars synonymous with Italian cities, he felt Ferrari could hit the ground running if he sold his cars on American soil. “The future is here Enzo,” Luigi said, adding that “You must believe that, here, sports cars will be a gold mine. There is hunger for motor sport. The market is virgin. There is plenty of money. The potential is immense.” This was a genius idea. Ferrari opted in.

Plagued by electricity challenges and shortage of fuel and manpower, it took almost two years to produce Ferrari’s first car – the 125 S. The car debuted at Piacenza, on May 11, 1947, and coasted to glory at the Rome Grand Prix a fortnight later. Ferrari’s popularity soared following wins at the 12 hours of Paris, the Targa Florio and the Mille Miglia, all in 1948.

Briggs Cunningham brought Ferraris to the United States with his purchase in June 1949. There was no stopping Enzo Ferrari’s race to dominance in Europe in ensuing years; he enjoyed Grand Prix championship wins in 1952 and 1953, and another Le Mans glory in 1954. Asked years later his most favorite of his car, Ferrari replied: “The car which I have not yet created.” And his most cherished victory? “The one which I have not yet achieved.”

Six months following his son’s death, Ferrari summoned his new Grand Prix team to their first meeting at the Modena Autodrome on December 2, 1956.

With a new season around the corner, Italian press iconized Ferrari’s team “Il Squadra Primavera—the Spring Team.” Unfortunately, the high hopes were dashed when one of the seven men retired days later, with the remaining six subsequently dying in high-speed crashes.

Meanwhile, back at the Factory, Vittorio Jano was getting up to speed putting finishing touches to a new racing engine they had designed at Dino Ferrari’s final moments. The six-cylinder engine was, in Ferrari’s own words, all set to “burst into song.”