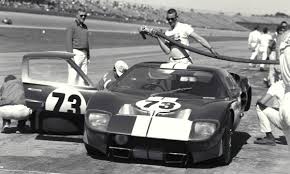 The American speed revolution continued to blossom in 1965. Now open to the thrills they could only dream of a few years earlier, the young kids of the 50s craved for adventure, and speed. Ford responded with the Mustang – a big hit. Equally popular were the Pontiac GTOs and Plymouth’s Barracuda. In 1964, racing competitions were attended by fifty million spectators, eclipsing baseball games in popularity and only behind horse racing in spectator numbers.

By 1965, Ford’s quest for speed and dominance yielded unprecedented gains. “The company is now enjoying the most successful operations in its long history,” Ford II announced in a stockholders meeting. Sales reached an unprecedented high- $9.67 billion worldwide over twelve months, with profit at an all time-record of $505.6 million. Some 333,841 people were now in the company’s payroll. The Mustang was on course to becoming the most successful car launch of all time. The racing version was already in the works with Shelby in charge. Iacocca’s hard work paid off, he was rewarded with a promotion to vice president of Ford, Mercury, and Lincoln cars and trucks. Don Frey was also installed as head of the Ford division, a promotion that brought him to limelight after an extended period working behind the scenes. But other news soon followed. It had to do with the boss himself; Henry II had filed for divorce. “Mr. and Mrs. Henry Ford II have decided upon legal separation,” his lawyer’s statement read. Not long after the split, on February 19, 1965, Henry II married the same Italian woman long believed to have swayed the boss’s attention to Europe.

At a press conference unveiling the company’s plan for the new season, Leo Beebe announced that Shelby American would be taking over the building of all sports cars Ford would be racing in the coming season. The move, according to Beebe was “to consolidate the construction and racing of all our GT-type vehicles within the same specialist organization.”

Built to race across major competitions in America and Europe throughout the season, the GT 40 was every inch America’s Ferrari fighter. It was designed specifically to challenge for the big three – the Daytona Continental, the 12 Hours of Sebring and LeMans. Having debuted his car, the Cobra, at the New York Auto Show three years earlier, Shelby’s reputation soared in the racing scene; his car sales toppled all other independent manufacturers in the country, employing nearly 200 people in the process.

It was eight weeks left for Shelby’s men to have a ready GT40 for the Daytona 500. The team took the existing car apart, starting from the ground up to redesign a winning race car. Over the next weeks, they rebuilt the air ducting system and lubricating systems, Halibrand magnesium wheels in place of the Italian wire-spoked tires, fixed larger front brakes, and installed an engine delivering 450 horsepower. “We have several advantages over other people who have played with the car,” Miles said addressing a reporter days before Daytona. “We can react to a suggestion—we can do something right now. We don’t have to go through elaborate procedures of putting through formal design changes. If we decide we don’t like something, we can take a hacksaw and cut it off. Practically everything we do is a panic operation. But if anyone can do it, we can.” Laid out over a 3.81-mile road course, the Daytona Continental 2,000 Kilometers was America’s longest race.

On morning of raceday, Shelby summoned his team, dishing out instructions and pep talk. Leo Beebe made the trip from Dearborn.  “This is a team effort,” Shelby began, and “The goal is to finish as many cars as high up as possible. Just let things take their natural course. If you happen to be in front, fine. If you happen to have an extra-long pit stop that puts you back to fourth, I’ll give you instructions as to whether you should try to pick up time or hold your position.”

Thousands gathered to watch from the grandstands. By 10:00 am, three dozen cars thundered down the opening straight. If there was one man to keep an eye on, it was Surtees, who comfortably took the lead. Shelby knew stopping him would require something unusual. And it happened: Surtees blew one of his tires on the bank, fishtailing in a cloud of smoke and dirt, away from the track and onto the grass. With the car’s bodywork damaged, the Ferrari man was done for the day, giving Miles and his Ford teammate Ruby an advantage. The sight of Miles speeding past the grandstand at 190mph was simply surreal. The race came to an end after 10:00 pm, and as the checkered flag waved, Shelby’s cars finished first through fifth. It only took eight weeks, and the elusive checkered flag was finally delivered to Ford II.