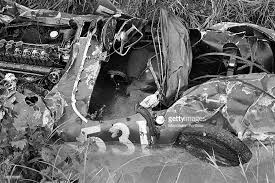 Enzo Ferrari lost his only heir, Dino, in 1956. And a trail of tragedies soon followed. On May 12, 1957, the stage was set for Mille Miglia, a 1000 miles race stretching between Brescia and Rome. With car racing increasingly becoming a staple in the annual highs of auto enthusiasts in Europe, the racecourse was greeted by some ten million spectators. The Mille Miglia was one of Ferrari’s most indelible days.

“It is the race of the people. One may say that the whole of Italy leans forward with her eyes on the tarred strip of road somewhere along the course on Mille Miglia day. “It is a day when I feel my life is useful,” he once said to a reporter.

The 1957 Mille Miglia was expectedly won by a Ferrari, but the buzz of victory was dampened by a tragedy, one that spread pretty fast from Tokyo to New York. It was Spain’s Alfonso de Portago, who, tucked in a Ferrari 335, blew a tire as he blitzed past rural Guidizzolo at near full speed. Colliding with a telephone pole, Alfonso’s Ferrari went flying into a crowd, killing twelve and leaving dozens more injured. The accident scene couldn’t be more indescribably hideous – a body of de Portago severed in two. The incident attracted an onslaught from the media, with clamors for the Mille Miglia to be abolished. And so what was once Italy’s most decorated sporting event was called off, permanently.

Ferrari’s role, the charge claimed, was that his race cars came with Englebert tyres unequipped to accommodate the speed for which they were designed. Although he was ultimately declared innocent, Ferarri would contest the battle for the next seven years. At court, Ferrari felt betrayed; he had spent the greater part of his life fighting for national glory. Fighting for Italy’s honor as the world’s leading racing nation. But here he was, needing to defend that he didn’t kill anyone. “Why should I continue in an activity whose only reward is being branded a murderer?” he questioned. He considered quitting, but his love for racing cars wouldn’t let him.

More troubles soon followed, this time, in a different race car – the Dino One. Designed in honor of his late son, the Dino would go on to claim both life and glory. Rome’s Luigi Musso was the first casualty, dying in a Dino Ferrari during the French Grand Prix on July 6, 1958. British Peter Collins was next at the German Grand Prix. And while contract driver Mike Hawthorn won Grand Prix of Morocco in the Dino, he would also later succumbed to the deadly clutches of a wrecked Jaguar weeks later.

What ensued in Europe was a fierce debate on the safety of car racing. A report estimated that 1 in every 4 driver didn’t see out a racing season. Enough statistic to send chills down the spine of moralists, journalists and conscious sportsmen alike. The onslaught on Enzo Ferrari didn’t stop at the press though. The Vatican also chimed in its displeasure, regarding Ferrari “a modernized Saturn turned big industrialist [who] continues to devour his sons. As it is in myth, so too is it in reality.”

With most of his trusted experts dead, there was a dearth of talent in Ferrari’s camp in 1960. But there was still one man. He’d relished the opportunity to show up on the big stage. His name was Phil Hill, a twenty-eight year old from California. “How would you like to drive for me at Le Mans?” Enzo Ferrari asked. Hill had always hoped for this day. And here was his opportunity. Yes – he answered. How would Hill fare at Le Mans? We’ll find out in the next article.